A downloadable game for Windows, macOS, and Linux

Hey, you! Wanna date a monster?

Love Mythos: Sanctuary Island is an all-inclusive, one of a kind Visual Novel and Puzzle game for PC, Mac, and Linux. This venture features a balance of immersive story, as well as a mini game to progress both relationships and dialogue. But Love Mythos isn’t just pure titillation (not that there’s anything wrong with that, amirite?). As the main character, you can help guide your fellow wounded companions through rehabilitation, or let them slip into bitterness and revenge. Your decisions, your words, your actions shape the entire world and who these fey will come to be.

This Demo contains the Prologue and Chapter One of both Faki and Semira, a satyr and a mermaid, respectively. A 20-40 minutes experience with branching dialogue and a mini-game, this demo is to give you a taste of what Love Mythos has to offer!

Demo is SFW but the main game will have adult content.

Also, all demo versions support both English and Brazilian Portuguese.

I love the demo, but this definitely  something wrong with the mini-game (or I'm not playing it right) I'll get down to one ball while my opponent has more and it will say that I lost.

How are things going?

a lot of new things, a lot of interesting characters, a lot of races, a lot potential friends, a lot of places to discover, a lot of conversations...

This is certainly a very good-looking game with interesting characters. (My personal favourite is Talon, who is adorable, although none of the guys are unappealing.)

I have to admit that I was a little weirded out by Cabelo calling my MC "sheila" even though I had chosen male pronouns, and then outright saying that it means "lady". Is this a bug?

Anyway, good luck with the Kickstarter and the game development.

You are right! Our programmer is Brazilian and not super familiar with Australian slang, so when I didn't notate that part correctly to be a pronoun variable, he didn't put it in. Thank you for pointing it out and it will indeed be fixed! <3

Also I love Talon too T^T He's one of the most earnest of all the peeps and I adore that. Thank you for your comment!

I would like to say I played this game for an hour and 30 on my stream. It was nothing but a wonderful experience. The characters were lovable and even relatable with character design. I am hoping nothing more that this game is funded the community needs a games like this. I will be playing more of this next week and will even help fund this game myself. Here's a clip from my stream of a character I really loved because she looked like me. https://www.twitch.tv/tiffanywitcher/clip/GiftedEnjoyableTapirOMGScoots?filter=c...

We're so happy you loved the game! And what time are you playing? We'll make sure to share you everywhere!"

I love how well thought out the characters are.  the developers have done a great job to ensure it's all inclusive and representative of a vast spectrum of types.  the artwork is adorable and the music is serene and on point.

Nice! Here's hoping you guys make it on kickstarter, I'd love to see more.

Thank you! We hope so too! We're at 32% so there's certainly a LOOOONNNNNGGGGG way to go!

The Kickstarter mentions you plan Linux support. Are there any plans for a Linux version of the demo ?

I can have our programmer upload one ASAP if you like! It's just a matter of publishing the build through a program.

That would be great, thank you. Having a Linux demo helps with the Linux crowd on Kickstarters. We get burned a lot so having proof that you are working on a Linux version goes a long way.

Hey, that makes sense to me!

Sorry it took so long to get back to you! I was traveling to NYC. But the linux demo has been added.

No worries that was quick in my books. I got a chance to try the demo. I liked it, pledged to the Kickstarter and shared the news of the demo around. Best of luck !

Just finished the demo and it was great! Loved the mini game and what ithad to offer so far. Cant wait for the full game to release. <3

Hi! Does this demo work for Mac? I keep trying to download it but every time I click on the .exe file it keeps giving me an error that it cannot be extracted.

Huh! It's supposed to. Let me check with our programmer to see what's up.

Hi again! I just finished playing through the demo and loved it! It ran perfectly smooth on my computer and the art and music are absolutely beautiful. The dialogue between the characters is really cute too! I personally found that the controls of the mini game worked well for me as well. I can't wait for this game and I'm heading over to Kickstarter soon! :)

Ahhh, we're so glad that we were able to get the game to you and that you liked it T^T T^T Do you have a favorite love interest yet? We look forward to seeing you at the KS!

Thank you so much again! Also hmm that's so difficult because all the characters are so likeable! Even though there wasn't too much dialogue with Taurren yet, I thought his shyness was adorable! Also Buriko seems so sweet! All the potential love interests seem so interesting and I can't wait to play the full game! I just pledged on Kickstarter :) also good luck and thank you for making this game!

And we're so glad you loved them. Fingers crossed our KS is successful! We're almost at 30%!

Looks nice but I don't like mini-game in my VN.

Good Luck with your Kickstarter anyway ^^

And thanks for the demo...now,I'm sure I really hate bubble game xD

Hey, that's alright if you don't like the mini-game! Different tastes are what makes the world go round! Thank you for taking the time to tell us your opinion!

It's sad because I love the artwork  :)

I would loved to play the game ^^

We'll talk about maybe making a version where you don't have to play the minigame, but then that changes a LOT of the mechanics so I'm not sure it's possible. I'll let you know, of course! <3

Interesting so far. Will be following to see the full game. One complaint I do have is that the control for the bubble game is far too slow. Not sure if the game's lagging or what but...

Oh, that's for your input! We'll look into that for future builds.

I cannot wait to see the full game when Its done and I will be streaming the demo myself to my fans!

<3 <3 We appreciate your feedback so much!

I went to click on "Settings" but even though my mouse was hovering the word Settings, the "Quit" button was enlarged and it quit the game. Position of those buttons must be off.
When choosing screen resolution options, my screen resolution of 1920 x 1080 repeated several times, as well as many other resolution options.
Text Sound is checked (or "X"ed) but there is no sound as text scrolls across the screen.

Recommended enhancements:
There was no option for screen resolution of my ultrawide screen 2560 x 1080.
There was no "Borderless, Fullscreen" option that you see in most other visual novels.
Allow the [Enter] key on the keyboard to advance the dialogue.
First noticed when speaking to Zephine - even though there appears to be room for 3, maybe 4 lines of text the dialogue more often than not shows 1 line of text at a time. You often have to "advance" to continue the person's spoken line to complete the sentence. This is a great opportunity to make use of that extra space and break the dialogue into a more complete thought. Maybe this is a screen resolution thing? If so, smart programming to display more lines on larger resolutions would be a plus.
Having an option to open a window to see past dialogue would be super helpful in case a line is accidentally skipped too fast. Important feature in several visual novels that this one is lacking.

General feedback:
I like the gender choice at the beginning of the game.
The writing is great and I like the genre.
Being able to change the text speed mid-game and seamlessly return is a plus.

Minor bug, just some QA stuff:
· Spelling/Grammar:
·· The line "I was on a small ship  speeding away from the one I had been kept prisoner on." has two spaces between the words ship and speeding.
·· The line "Many years ago, there was a great war between the Humans, and the Fey." overuse of commas. The comma between "Humans, and" is unnecessary. This is actually a more common issue throughout the game's dialogue. I'll only mention it once here so I'm not being too nit-picky.

Thank you for this thorough feedback! It means so much that you took the time to play the game and then write out all your thoughts! We hope you'll keep an eye out for our kickstarter! 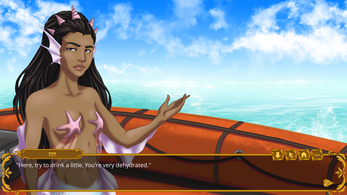 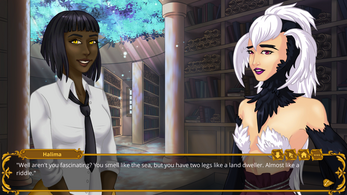 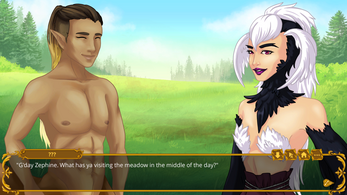 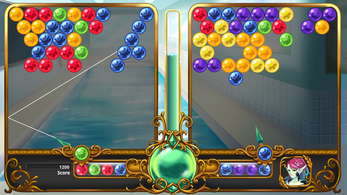 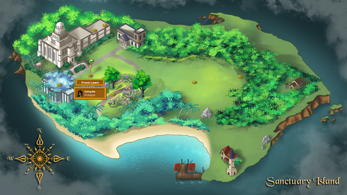